The future of iPhone lies in the unification of the iOS experience. iOS 10 has paved the way for new interactions between apps, but iOS Fuji takes it even further. With new capabilities for Siri, a centralization of data in some core iOS apps such as Messages or Contacts, and much more, iOS Fuji promises to deliver a unique and promising experience for future iOS users.

Siri Panel is a new way of using apps with your smartphone, designed to ease multitasking. The things that you do get stacked in a linear flow, where apps appear as minimalist versions called Siri Cards. Siri Panel has been thought to be used with voice and touch inputs at the same time, but it can adapt and be used with touch gestures only as well. 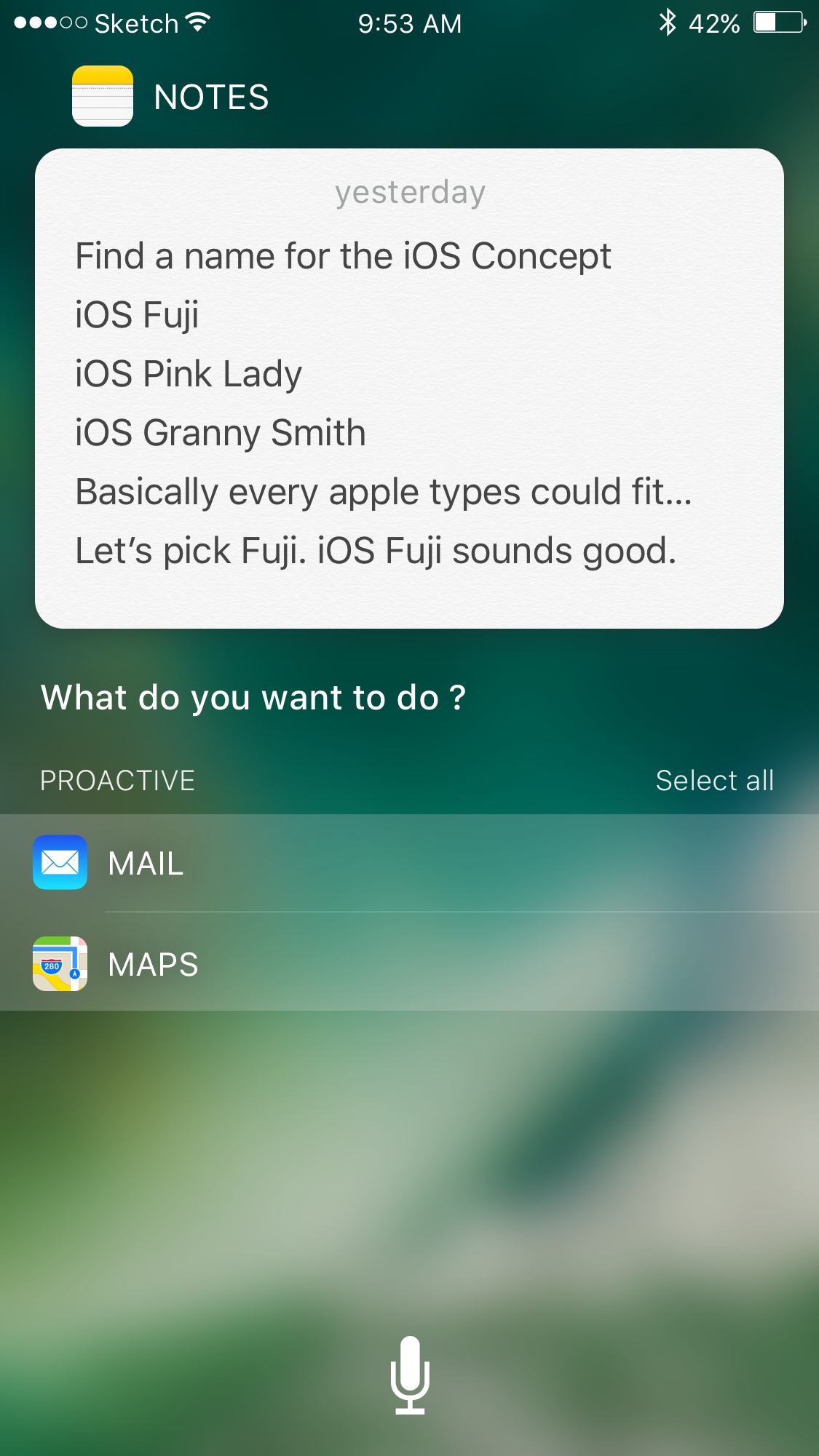 From app to Card.

When using an app, long pressing the Home button will summon Siri Panel, and transform the current app into a Siri Card. Siri is then ready to take action.

Proactive suggestions suggest you the applications you usually open with the current one, so as to help you get things done quickly. So you can quickly open Activity and Music if you are about to jog for instance. Or Notes and Mail to easily share your writings.

You can ask Siri whatever you want. Like showing your recent messages with a friend. Siri will parse the apps that are on your phone, and highlight all the conversations from any app that took place with your friend.

Siri Panel is fully usable with the touch interface. By 3D Touching the mic icon, you can display some of your recent and most frequent requests and have an easy access to what you do the most on your iPhone. And if you summon Siri using 3D Touch, Siri will go quiet, so that you may be able to use your phone in a crowded place.

With a single tap on a Card, you can expand it and use it as a normal app; you can easily dismiss it, go back to Siri Panel and quickly use other apps that are on your flow. With 3D Touch, you can also press hard on a Card to take a peek, swipe while pressing to display more options, and press harder to open the app. 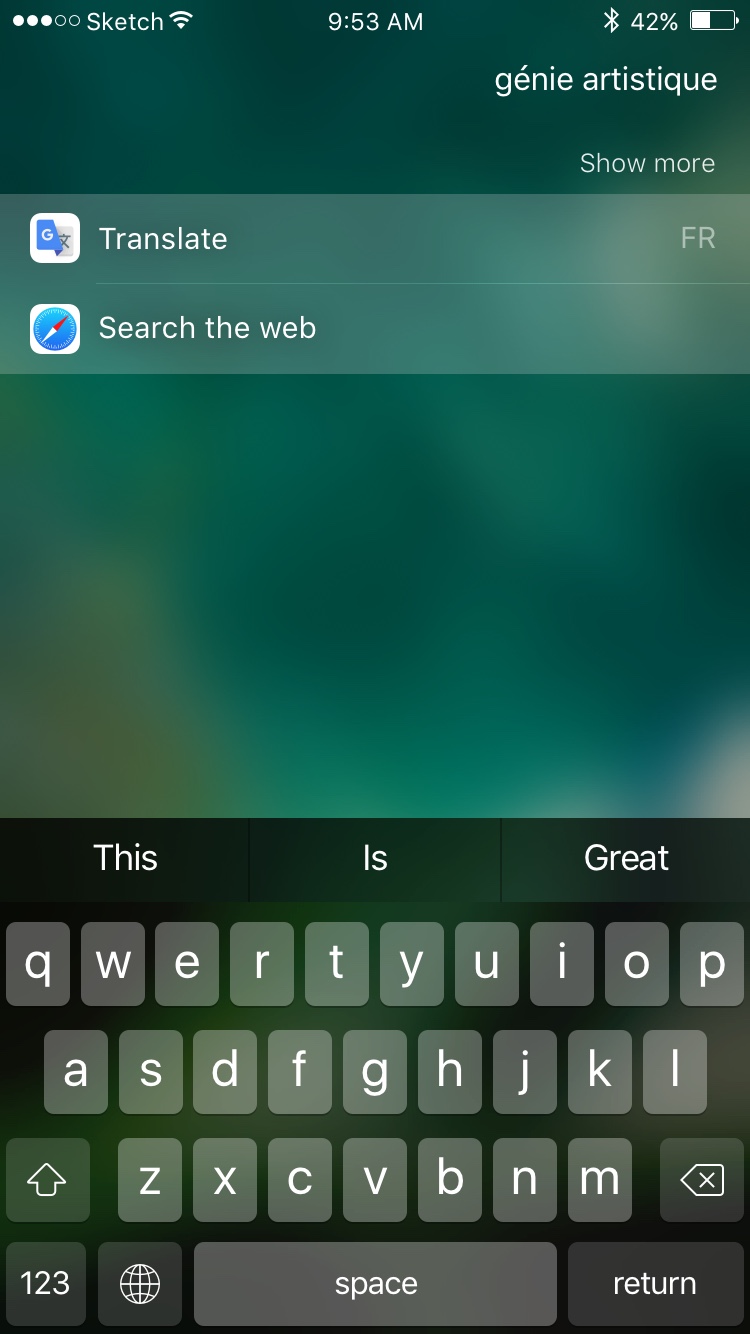 Universal Functions is a huge improvement of the Universal Research. It lets you use the basic functions from your apps - such as translating a word, or sending money - with a single tap. Open Siri Panel, touch the screen, and start typing what you want: proactive buttons will pop up and show you the most appropriate function to use. 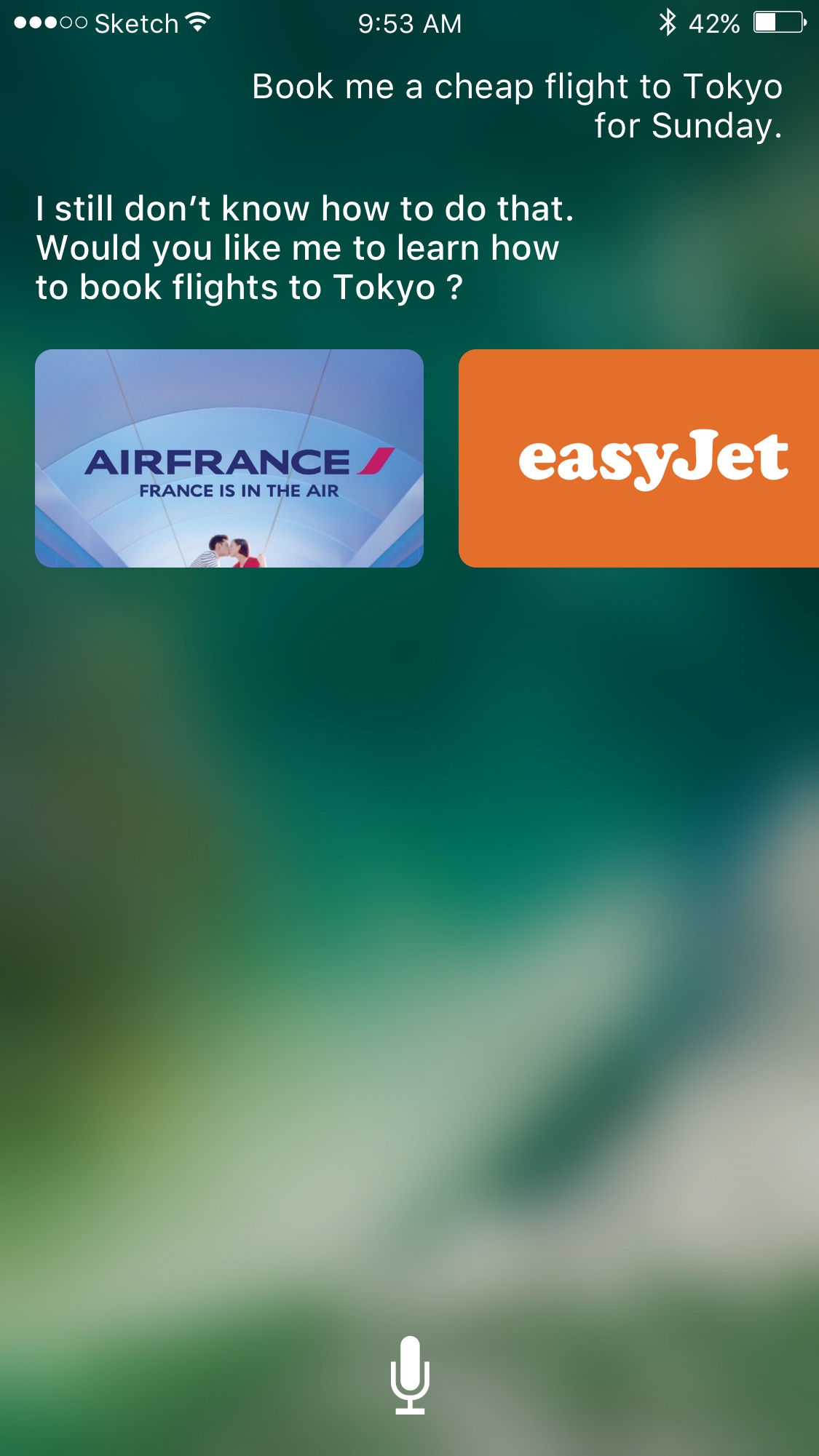 When Siri cannot do something, it will ask you if you want it to learn how to do it. With a single tap, you can install new extensions that will improve Siri’s abilities.

Hey Siri A true assistant in your tasks.

In iOS Fuji, Hey Siri has been designed to work alongside what you are currently doing. Take a look at the things you can do with Siri by your side.

Inside apps, you can use « Hey Siri » to display another app above the current one. By 3D Touching an item on the card, like an image or a text bubble in a conversation, you can put it onto the app below. You can also hard press on the Card to fully open the app.

With « Hey Siri », you can search for content without interrupting what you are doing. So that you can continue typing your message while Siri is looking for photos you took this summer. The results will be displayed on top of the screen so that they don’t disturb your current activity.

Single Sign-On The account manager we have all been waiting for.

The feature introduced in tvOS called "Single Sign-On" is now coming to iOS. No more countless accounts on your phone for your apps. Everything is centralized in one place. Just lay back, and let iOS create accounts for you.

Creating accounts has never been so fast and secure. In apps, just tap on the button "Connect with Apple Cloud" when you need to create an account, pick a username, and iOS will take care of the rest. Your passwords will be available on all your devices. 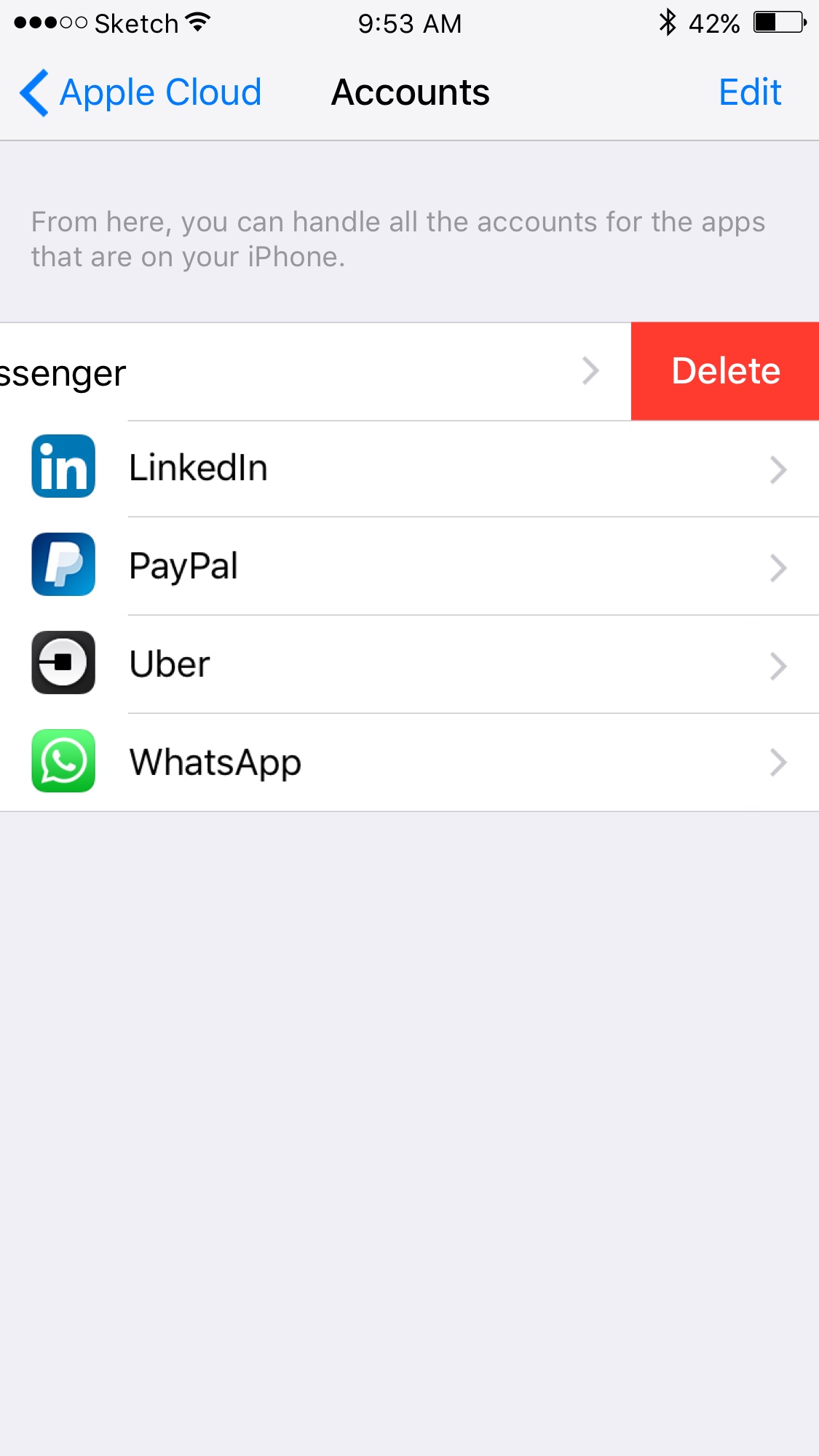 One place to rule them all.

In the Settings app, you can handle all the accounts that have been created for apps that are on your iPhone. No more endless procedures to delete your account on a specific service, or to change your username: it all comes down to a single swipe or tap.

Messages All your conversations in one place.

In iOS Fuji, all your conversations coming from third-party apps such as Messenger or Whatsapp, are found in the native Messages app. This is another step towards the ultimate unified experience desired by all: if you want to send a message to someone, just open the Messages app; no more questioning about which app to open.

Power to the user.

At the first bootup of Messages, the user is asked to activate Universal Messages. If he does, he then has to choose among the services available, and set a priority list to tell the app which service to use first. After Universal Messages are activated, contacts from all compatible services are added to the ones on the phone. 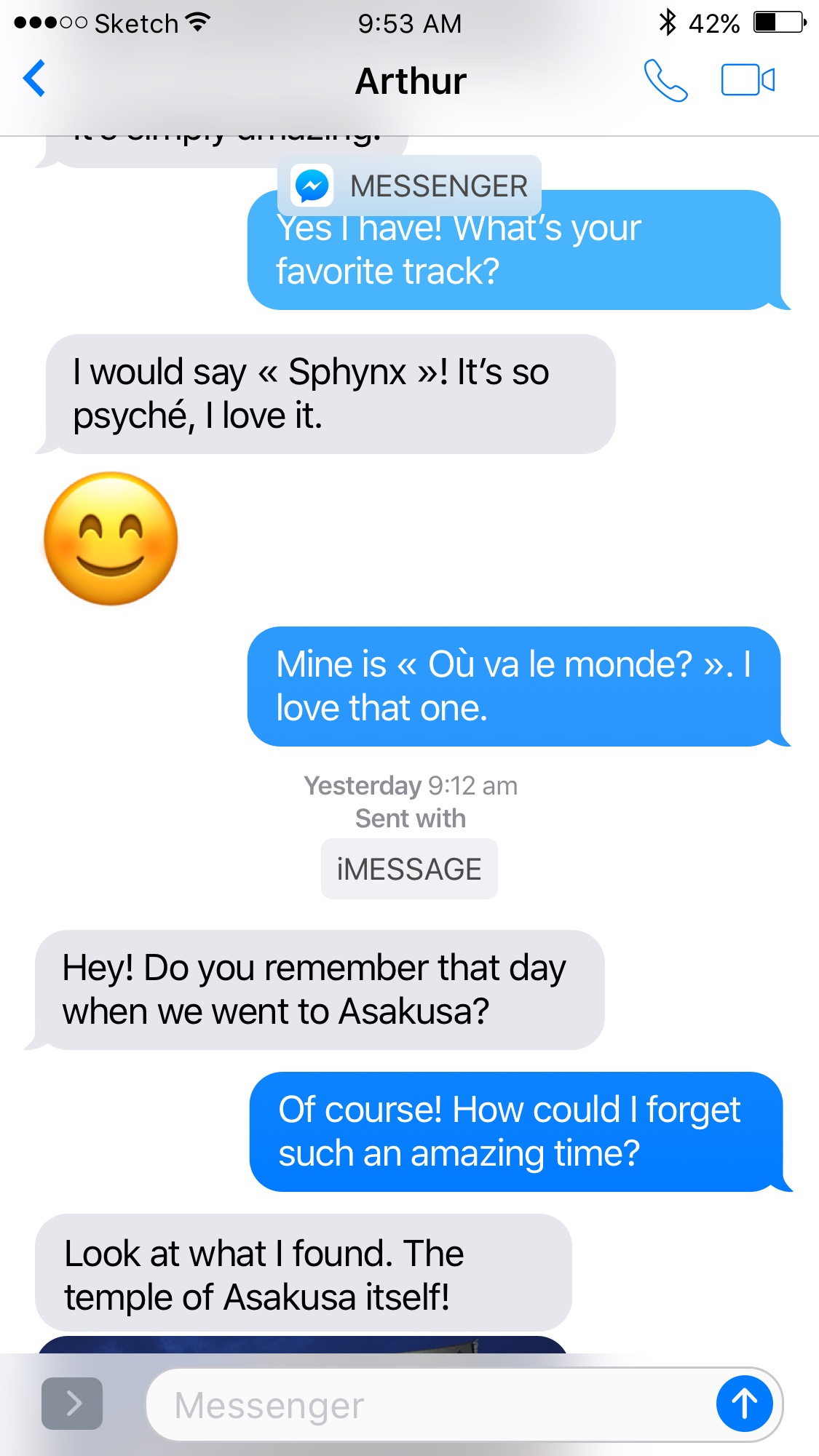 The Messages app automatically determines through which service to send the message. First, it searches where the contact is online. If the contact is online in multiple services, it uses the priority list that has been setup at the first bootup of the app. All of this happens under the hood; the user only cares about delivering his message to his contact. Also, if the user taps on the name of the app, he can open the corresponding conversation in the dedicated app.

Contacts Beautifully redesigned. For all your contacts.

Why should contacts info only be limited to a phone number or an email? Contacts are now open to third-party apps: iOS Fuji can dig through apps that are on your device and complete the info you have for your contacts. Somebody sent you a message through Linkedin? They are automatically added in the Contacts app waiting for you to confirm their identity. 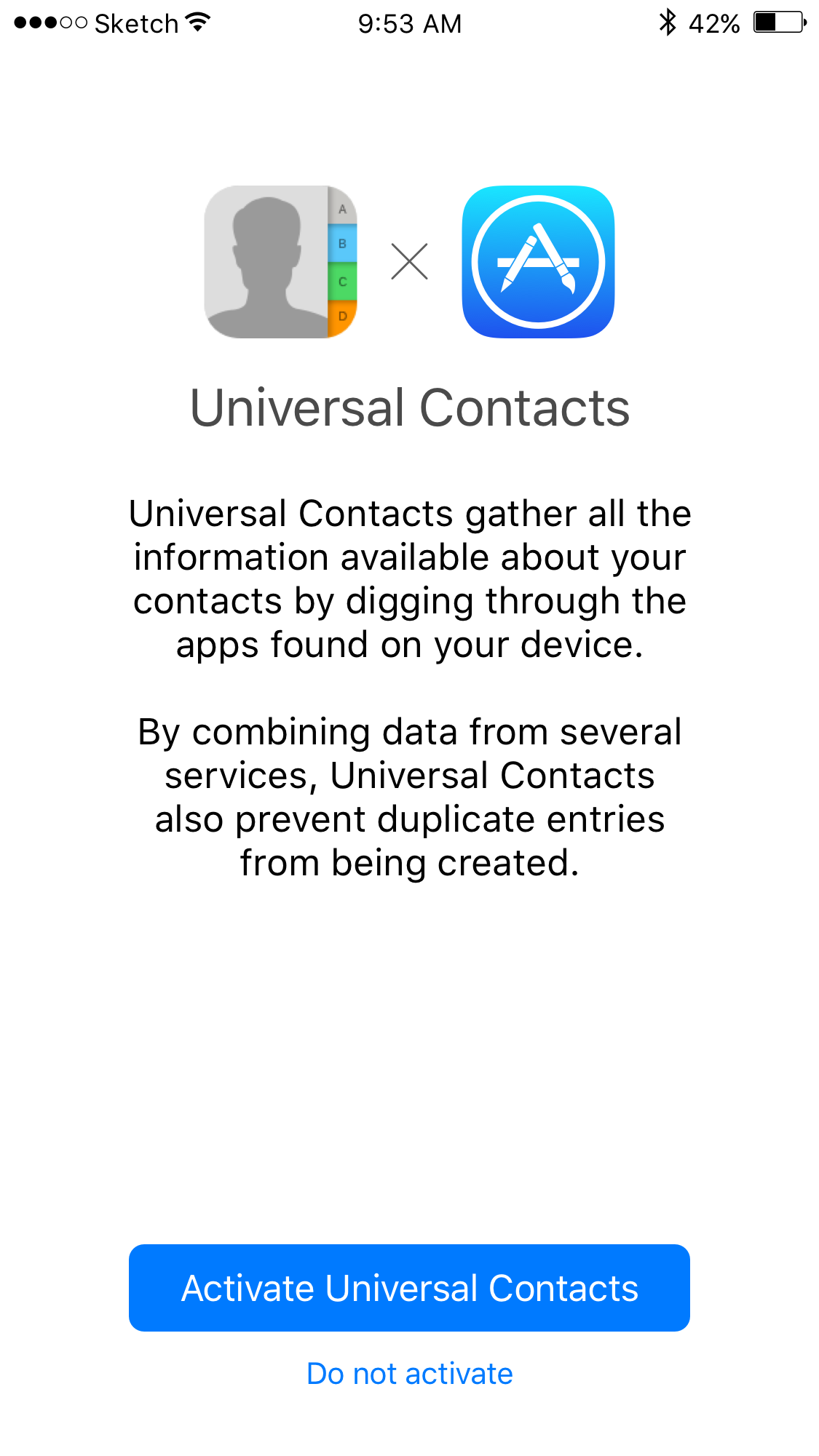 Same as for Universal Messages. At the first bootup of the Contacts app, the user is asked to activate Universal Contacts. By combining data coming from different apps, Contacts is able to erase duplicate entries and fusion contacts.

All the profiles are centralized.

For each contact, you can see your recent interactions with them, such as phone calls or messages sent through a messaging app. If you scroll down further, you will find all their profiles from all the services in which they are registered, such as Messenger or Linkedin. Simply tap an app to quickly take action without leaving the Contacts app.

Messages, Safari, Small Things... I still have many things to show you. But right now, I feel like I should publish what I have done for the Mac - macOS Newton. If you have any feedback or suggestions, please send a mail to eugene.kevin1@free.fr.

iOS Fuji and iOS Fuji 2.0 are concepts entirely made by me. I see iOS Fuji 2.0 as an evolution of iOS Fuji (which can be found here eugenekevin.github.io). In a sense, version 2.0 is where I wanted to take the concept in the first place, which really was not about the Pickpad, but about productivity. Everything that was in the initial concept (Pickpad, Cards version 1, Music, etc) that is not here has been dumped (except for The Small Things which should be published again soon in a better version). I made these concepts for fun with passion and love, because I wanted to share with the world some of my ideas. No commercial purposes are intended. This website is a tribute to Apple's famous designs, and should not be seen as a counterfeit or a pale imitation. Making something new while respecting Apple's aesthetics codes, for the website as well for the concept itself, was really challenging. iOS, iPhone, macOS, Mac, Continuity, 3D Touch, etc. are trademarks that belong to Apple. Thanks to Simon Mettler, Pham Thi Dieu Linh, David Pareja, Zachary Bogard, Akshay Kore, Marie Van den Broeck, Marcio Duarte, and Marek Polavic for the icons they designed and that I used for the purpose of this website. And also, many thanks to the designers of sketchappsources.com for building graphical resources from the iOS GUI that I used and built upon for my concept. The sketches have been designed using Sketch, and the animations using Principle.